Posted on: Feb 8 2013by admin in Uncategorized

26th January 2013
The North of England Cross Country Championships took place on Saturday 26th January at Knowsley Safari Park. The heavy snow on Friday night made conditions very tough indeed. A mix of very deep snow and mud made it very challenging for all taking part. The mud and snow!
Alannah Newell and Millie Maciver ran well finishing 86th and 105th respectively in the under 15 girls event. Jack Thomas was the only ECH representative in the under 13 boys event finishing 115th, as was Hayley Simpson in the under 17 women’s race finishing a solid 73rd. There were two ECH runners in the under 15 boys event, great runs from both George Lewis in 46th and Luke Piper just behind in 48th position.
In the senior women’s event, Janine Ridgard and Emma Macqueen were East Cheshire’s brave souls completing the 2 large laps finishing 104th and 110th respectively. Six ECH men took to the tough challenge of running the 12km course, with John Sloan the first man home in 137th position. Gary Matthews 215th, Simon Grundy 222nd, Gavin Browne 333rd, Derek Hughes 362nd and John Bowker 519th made up the team. The team finished 33rd overall out of 58 teams. 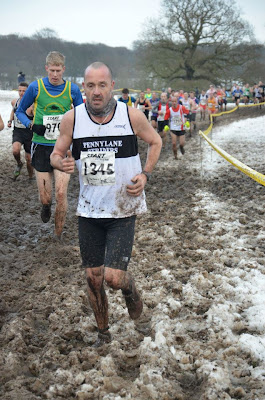 Gavin Browne negotiating the mud and snow
The highlight of the day came in the under 17 men’s event, with in-form Joe Steward running a fantastic tactical race to finish in an amazing 2nd position. Joe was in a the break away group of about 10 athletes, which then whittled down to about 5 with not long left to run. Joe came from 5th, quickly into 2nd position on the final loop, showing he timed his run very well indeed. Joe held on for a superb Silver medal, only two seconds behind the winner. In the same race, much improved Tom McGuinness finished a very solid 58th position showing he’s getting into some good form himself! Joe Steward on his way to 2nd place
Well done to everyone who competed in very tough conditions, hope to see you all at the Nationals in February!
>Full Results<