Posted on: Feb 8 2013by admin in Sportshall, Uncategorized

Sun 27th Jan
A huge squad of 29 East Cheshire athletes took part in the Greater Manchester Sportshall Championships and returned with a record haul of 21 medals, with great performances throughout the day spread across all age groups and events. The presentation ceremony also included the award of a certificate for the under 13 boys squad’s 2nd place finish in the League season. Multiple medal winners on the day included Rebecca Kennedy (3 golds), Luke Taylor (2 gold and 1 silver), Alex Green (1 gold and 1 silver), and debutant Sam Emery-Shawcross (2 silver). Sam and Alex were half of the gold medal winning under 13 boys relay team, which also included an under 11 substitute in Harry Ditchfield. Further relay success followed when the under 15 girls team, comprising Rebecca, Monica Borejko, Danielle Parrott and Charlotte Hesketh, produced a faultless performance to take gold in a hot race. We expect to see a number of the squad named in the Greater Manchester squad for the upcoming Regional Finals at Wigan and will publish the details shortly 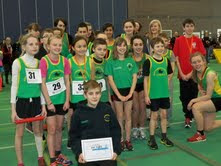