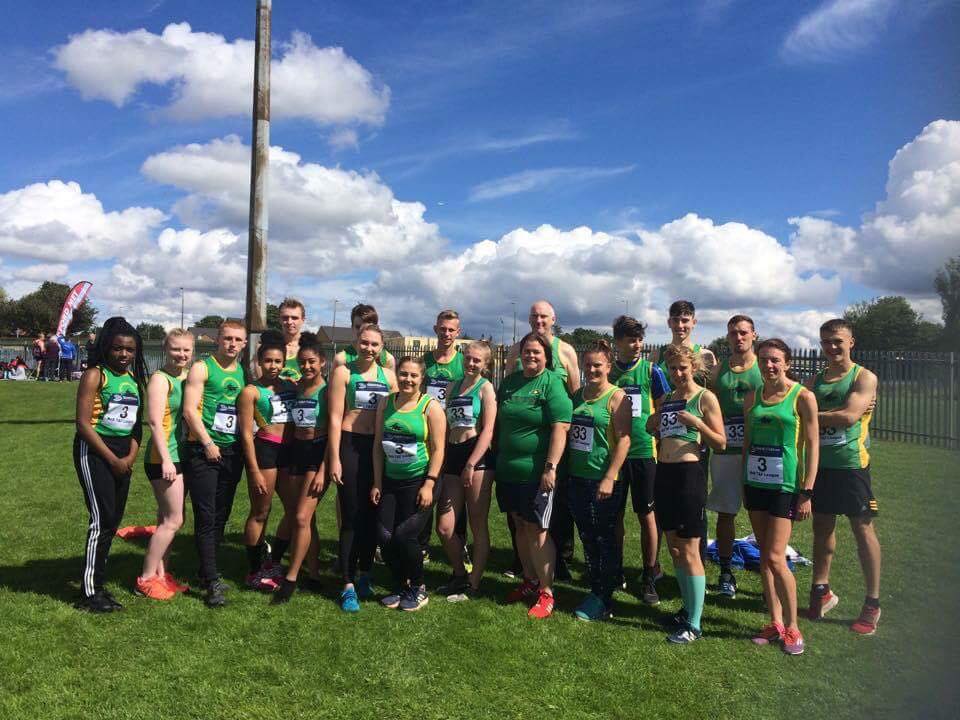 This season East Cheshire’s senior team have been taking part in the Northern Athletics Track & Field League in the 3WC Division. The League consists of four meeting over the summer with the aim being to finish in the top 2 teams overall to gain promotion to Division 2 next season. The other 5 teams were Liverpool Pembroke & Sefton AC, Salford Metropolitan AC, Border Harriers AC, Horwich & Chorley AC and Burnley AC.

A coach load of athletes took the long 3 hour journey up to Whitehaven for match 1 and competed well with a small team to finish 2nd overall behind Liverpool Pembroke AC with 352 points. Highlights included Mussie Kassa and Joe Hudak both winning their 1500m races gaining full points for the team. Sally Teague won both her 200m and 400m races as did Abby O’Neil winning her 200m and 800m races. The women’s team also won the 4 x 400m relay at the end of the day.

A larger team travelled to Burnley for the second match with the team again finishing an excellent 2nd place behind Liverpool with 374 points in total. Highlights included Mike Coogan winning his 200m race in 23.5 and young Mussie Kassa again impressing winning the 5000m in 16.20. Rebecca Kennedy and Anaya McDonald both won their 200m races with the same time of 27.5 seconds. Beth Pearson and Lynne Lockhart both won their hammer throw competitions and the women’s teams won both the 4 X 100m and 4 X 400m relays.

Another good showing by the team in the third match at Edge Hill with our highest points total of the season scoring 406 points again in 2nd place overall behind Liverpool. Highlights included Joe Hudak winning both the 800m and 1500m A races with Nathan Barlow winning the 800m B race. George Lewis won the A race in the 3,000m Steeplechase with Gavin Browne winning the B race. Mussie Kassa again won the 5,000m race with Jonathan Aust winning the B race. Matthew Ogden cleared a brilliant 2.80m in the pole vault to win the event. Talia Corbett won both the 100m and 200m B races with Anaya McDonald winning the 200m A race. Lauren Alford won the 400m hurdles B race, came second in the 100m hurdles A race, as well as winning both the B Javelin competition and the A long jump and high jump competitions! Rebecca Kennedy won both the B long and triple jump competitions and was involved in the winning women’s 4 X 100m team.

A good turnout for the last match which we hosted at Richmond Park Stadium. Another second place finish with 387 points secured promotion to Division 2 next season finishing in 2nd place overall. George Lewis and Joe Hudak won their 3,000m steeplechase races as did Nathan Barlow in the 800m B race. Jake Smith impressed winning his triple jump competition and finishing second in the men’s high jump. Talia Corbett won her 100m and 200m races as did Beth Hirst winning her 400m and 800m B races. Abby O’Neil ran well to win the 800m A race. Bethany Pearson and Melanie Lee both won their hammer competitions both throwing over 30 meters. Abby O’Neil and Lauren Alford won their Javelin competitions both throwing over 25 meters and Lauren also won both the 100m hurdles, triple jump and high jump events! Jayde Robinson also performed well finishing 2nd in her long jump competition and winning her triple jump competition.

A big thank you to all athletes, coaches, officials and parents for their efforts over the season. We scored extra points in meetings for people stepping up to officiate which was brilliant. Special mentions to Jack Dobson the women’s team manager and Gabriella Guarnieri the men’s team manager who both did a great job organising teams on the day. Good luck to all competing in Division 2 next season!