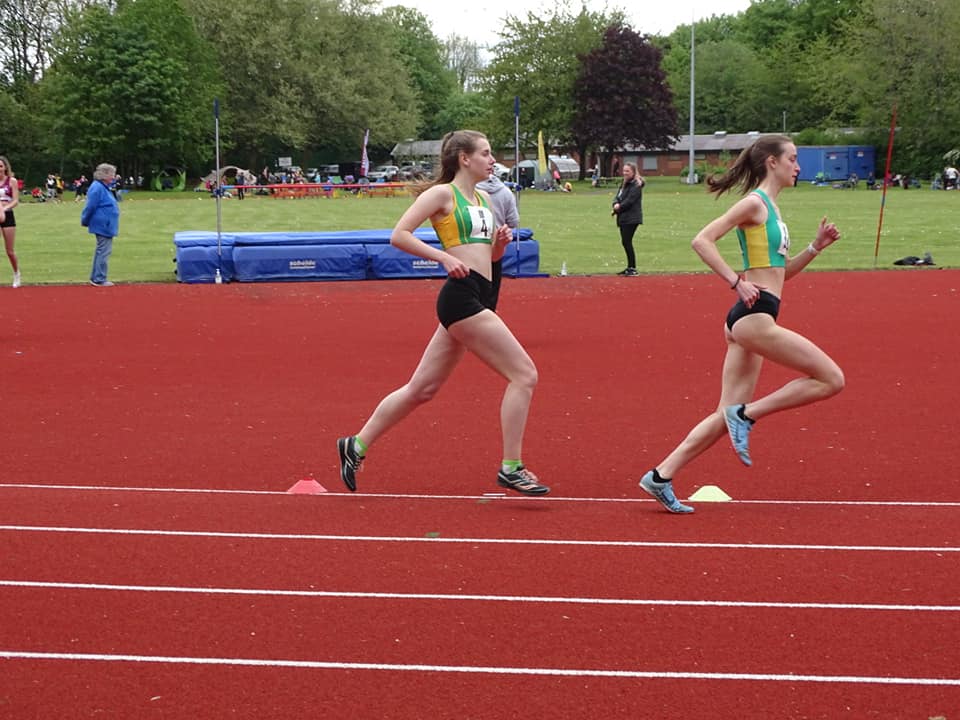 The first match of the North of England Track & Field League took place at Cleavley Athletics Track in Eccles. Well done to all ECH athletes, officials, coaches, parents and helpers for their efforts in helping the team score as many points as possible on the day. The team finished an impressive 2nd place overall gaining 412 points, only just behind Macclesfield Harriers who were the eventual winners with 437 points. Other teams in the league consisted of Crewe and Nantwich AC, Salford Met AC, Wrexham AAC, Altrincham AC and Deeside AAC.

There were many excellent performances on the day (full result below) but special mentions to Joe Hudak on winning the 800m and 1500m double, George Lewis for winning by over 30 seconds in the 3000m steeplechase and both the men’s teams for winning the 4 x 100m and 4 x 400m relays. In the women’s events special mentions to Sophie Yates for wining both the 100m and 200m, Emilia Platt and Megan Lewis were 1st and 2nd respectively in the 1500m (pictured) and Megan also won the 400m hurdles. Bethany Pearson and Melanie Lee were also 1st and 2nd respectively in the hammer throw, Katherine Waters 1st in the Javelin and finally the women’s team won the 4 x 100m race.

A big thank you to team manager Gabriella Guarnieri for her hard work on the day. More photos are available on the East Cheshire Harriers Facebook page.

The second match of the league took place at a very familiar East Cheshire Harriers! Many thanks to all the helpers, officials, team managers and athletes for their support on the day and making it run smoothly.

East Cheshire finished in 2nd place overall again with a solid 424 points scored. Again there were so many superb performances on the day. John Trotman had a brilliant day winning both the 100m and 200m A race’s as well as the Long Jump! Kane Grant and Roman Allison won the 100m B and 200m B races respectively. Another 800m/1500m double for Joe Hudak having a good battle with George Lewis in the 1500m who finished in 2nd place and 1st B runner. George also won the 3000m steeplechase earlier on in the day. The 4 x 400m men’s team consisted of Joe Hudak, George Lewis, Kyle Herring and Michael Obi who took the victory with a time of 3.38.1.

The women’s team did not disappoint. Maddison Vernon won the 100m A race in 12.8 with team-mate Sophie Yates winning the B race in 13.0. Lily Murphy ran brilliantly to win the 200m A race in 25.8 and Sophie Yates again won the B race in 28.0. Emilia Platt performed well again the 1500m winning in a time of 5.01 with Megan Lewis running 5.19 to finish 2nd and win the B race. Another one, two came in the 3000m with Hayley Simpson taking the win in 11.27 with Michelle Vaughan just 2 seconds behind making it a really close race! Other wins came from Megan Lewis in the 400m hurdles with 73.2, May Mannion in the long jump with 4.67 and Melanie Lee in the Hammer throw with 28.28. It was a great end to the day with both the 4 x 100m and 4 x 400m women’s teams taking victory.

The third match of the league took place at Longford Park Athletics Stadium in Trafford. A very successful day with East Cheshire taking their first victory in the league with an impressive 401 points overall. Well done to all athletes taking part and all officials, team managers and helpers on the day.

The last match of the series took place in Macclesfield and again the team performed well to finish a solid 2nd position with 403 points which was enough to seal 2nd place overall in the series. A massive well done everyone involved, a brilliant TEAM effort.

Stand-out performances came from Joe Hudak and Michael Obi both winning their 800m and 1500m races and Joe went one further to win the 3000m steeplechase too! Maddison Vernon again won the 100m race, with team-mate Sophie Yates winning the B race in the 100m and A race in the 200m. Katie Grafton also performed well to win the 200m B race. Emilia Platt again won the 1500m with Megan Lewis not far behind in 2nd place. Another 1, 2 came in the 3000m with Megan Lewis this time taking the victory with Aliesha Smith just 8 seconds behind. Finally, the women’s team finished with a victory in the 4 x 100m relay.