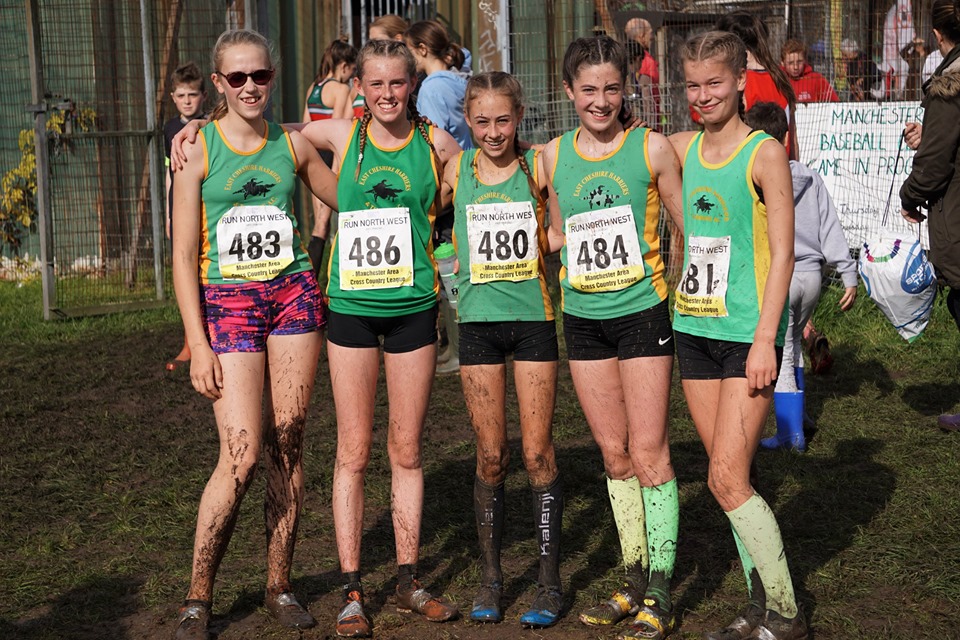 The first match of the cross country season took place at a flat but very muddy Wythenshawe Park with a great turnout from ECH athletes  The under 13 boys team finished a solid 8th place overall with excellent performances from Bobby Burton 13th, Tim Elgar 26th and Oliver Bentley 32nd making up the team. The under 13 girls were also well represented with the team finishing a creditable 6th place with Emily Bowker running brilliantly to finish 3rd overall. Good performances coming from Darcy Slattery 30th and Maria Rooke 35th made up the team. The under 15 girls team finished 8th overall with Matilda Byrnes having a great run to come home in 12th place, followed up by May Mannion 24th and Aliesha Smith 26th. Megan Lewis had a fantastic run in the under 17 women’s race to finish 5th place with Rose Barlow 11th and Katherine Waters 28th making up the team which finished a superb 4th place overall.

Well done to all athletes. See photo inset of the under 15 girls team and below some of our under 13 girls. More photo’s are available on our Facebook page. 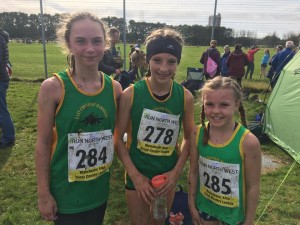 The second match of the series took place at the University playing fields / Kenworthy Woods in quite good running conditions despite the heavy rain we have had. Another fantastic turnout from ECH athletes which kicked off with the under 11′s. The boys team finished 7th overall with Alfie Manser finishing a very impressive 5th place followed by Marshall Fleet 26th who was closely followed by Finley Partington in 27th to make up the team. The under 11 girls team finished a creditable 12th with Anna Rooke 30th, Isla Herring 40th and Olivia Kelly 51st all performing well. Bobby Burton had a strong run in the under 13 boys race finishing 11th in a high quality field with Tim Elgar and Oliver Bentley 29th and 34th respectively bringing the team home in 6th position. The under 13 girls team also finished 6th with Emily Bowker achieving our highest finishing position of the day coming home in 4th position with teammates Darcey Slattery and Maria Rooke having a close battle in 25th and 26th places respectively. The under 15 girls finished a solid 8th place with good performances coming from Matilda Byrnes 15th, May Mannion 21st and Imogen Gush 35th.

Our highest team finish on the day came in the under 17 women’s race with excellent performances coming from Megan Lewis 6th, Rose Barlow 10th and Katherine Waters in 26th place. The senior women finished a very creditable 8th place out of 67 teams with Hayley Simpson first home having a great run finishing 11th place overall. Bethany McManus 36th, Michelle Vaughan 60th and Karen Fleming 120th completed the team. The senior men’s team finished a respectable 7th position out of 69 teams with David Barratt first back for ECH in a brilliant 9th place. Ever consistent Joe Hudak was next in 22nd followed by Gavin Browne 32nd, Scott Matthews 36th, Robin Horner 96th and Liam Browne 111th making up the team.

Well done to all who took part and thanks to the coaches, parents etc for their support on the day in cold conditions! A picture of some of our under 11′s getting ready for the start below – more photo’s can be found on our Facebook Page. 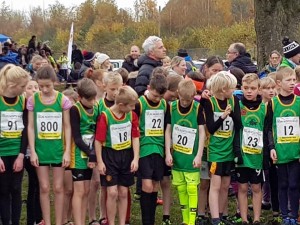 The third match of the series took place at a new venue in Birkenhead called Arrowe park in tough muddy conditions. Again another good turnout from ECH athletes despite the long drive.

The under 11 boys performed well to finish 6th team with great performances from Alfie Manser 12th, Marshall Fleet 24th and Finlay Partington 32nd. The under 11 girls finished 8th team with Ava Royle 26th, Anna Rooke 34th and Harriet Byrnes 36th all running well. Bobby Burton had another consistent run coming home in 6th place in the under 13 boys race followed by Oliver Bentley 21st and Tim Elgar 27th making up the team which finished a solid 4th place overall. Emily Bowker had another brilliant run to finish 2nd in the under 13 girls race with teammates Maria Rooke 28th and Alice Cunningham 31st bringing the team home in 6th place. The under 15 girls team finished a superb 4th place with Matilda Byrnes having a great run to come home in 3rd followed by May Mannion and Aliesha Smith in 14th and 22nd place respectively. Megan Lewis 4th and Rose Barlow 10th performed well in the under 17 ladies race.

Well done to all who competed on the day! Photo below of some of our under 13 boys in action. More photo’s can be found on our Facebook page. 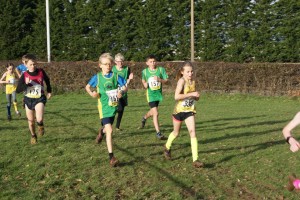 The fourth race of the series took place at Tatton Park a new venue for all athletes. Good conditions on the day allowed for fast races on a relatively flat course with some great views of the lake! There was a great turnout for ECH athletes and some fantastic results on the day…

The under 11 boys team finished a respectable 8th team with good performances from Marshall Fleet 29th, Elliot Singleton 31st and Edward Figgins-Barrett in 36th place. The under 11 girls finished a creditable 9th place with the team consisting of Anna Rooke 26th, Ava Royle 31st and Olivia Kelly 36th. The under 13 boys finished a brilliant 4th team, Bobby Burton was first home in 15th place with Oliver Bentley 24th and Tim Elgar 26th making up the team. Emily Bowker had an amazing run in the under 13 girls race to finish 2nd overall helping the team to 9th place with teammates Maria Rooke 38th and Erin Lord 41st making up the team. Matilda Byrnes also had a magnificent run finishing 3rd place in the under 15 girls race with Aliesha Smith 22nd and May Mannion 25th bringing the team home in 5th place overall.

Well done to all and see you at the last match on the 8th February at Heaton Park!

Please see our Facebook Page for some brilliant videos & photo’s on the day. Photo below of some of our juniors having fun warming-up! 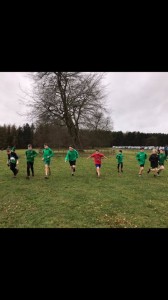 The final match of the series took place at Heaton Park (again) in rather good running conditions. Well done to all athletes who took part on the day, some excellent performances from ECH representatives.

The under 11 boys team finished 6th with Alfie Manser having a great run to come home in 7th place followed by Marshall Fleet and Edward Figgins-Barratt in 24th and 32nd respectively. One place better for the under 11 girls team packing well to finish 5th team with Anna Rooke 16th, Harriet Byrnes 18th and Olivia Kelly 21st. The under 13 boys team also finished 5th with Bobby Burton having a great run in a strong field coming back in 8th place with Tim Elgar 22nd and Alfie Bundy 26th making up the team. The under 13 girls team finished a respectable 12th place with good performances coming from Maria Rooke 31st, Alice Cunningham 39th and Kayla Corbett 45th. Matilda Byrnes had a brilliant run to finish 5th place in the under 15 girls race with teammates May Mannion 20th and Aliesha Smith 25th bringing the team home in 5th place overall. An outstanding performance from Megan Lewis in the under 17 women’s event in a close race finishing 2nd place overall.

Well done to those athletes who were able to complete the series by taking part in 4 out of the 5 races (3 out of 4 for under 11′s). Special mentions to Emily Bowker (3rd under 13 girl), Megan Lewis (3rd under 17 woman) and Hayley Simpson (3rd senior woman).