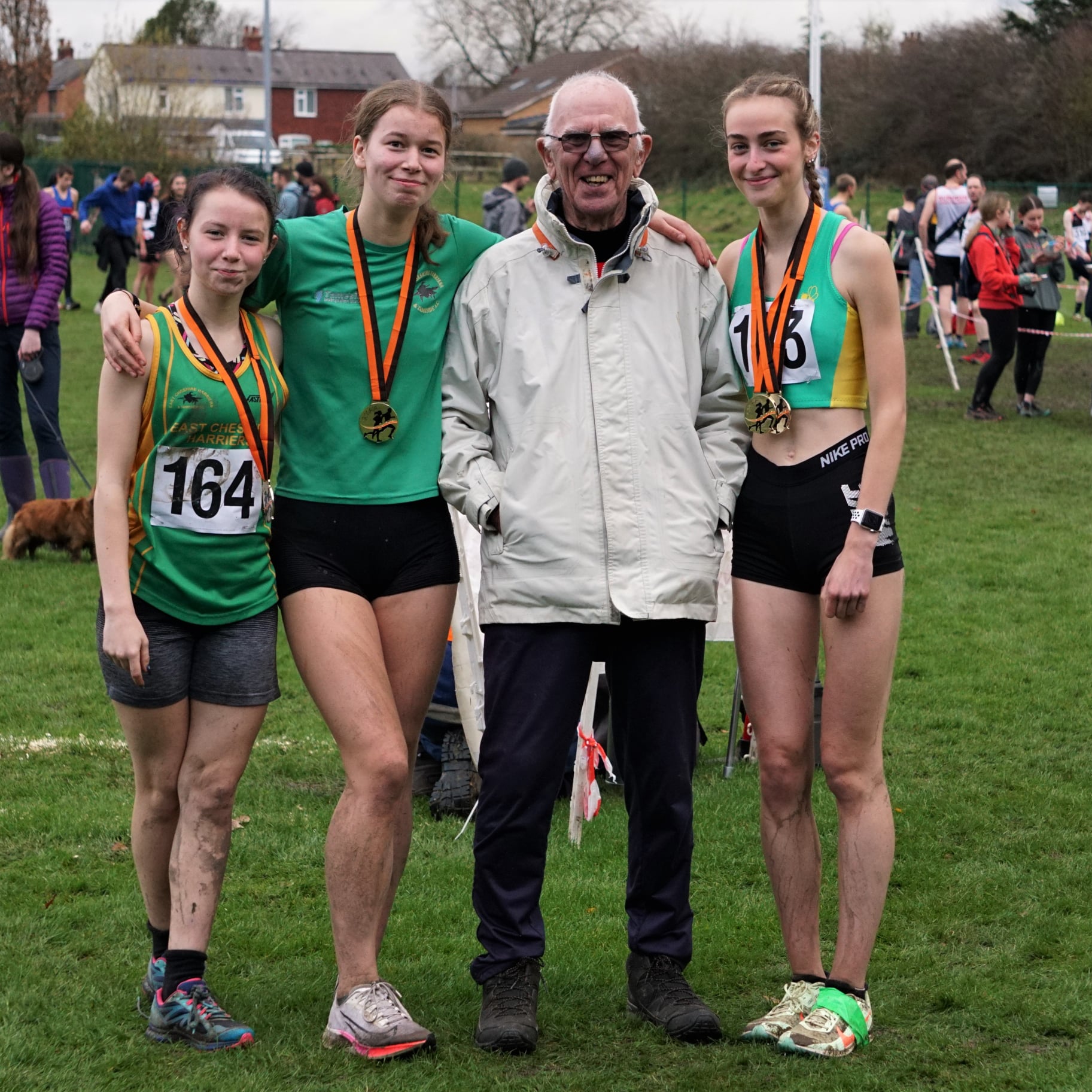 The Greater Manchester Cross Country Championships took place at Leigh Sports Village on Sunday 12th December in rather warm conditions for this time of the year. It proved to be a great cross country test with some really good running in places and thick mud and a huge puddle to negotiate in other places!

The top 4 finishers in each age group get automatic selection to represent Greater Manchester at the Inter Counties Cross Country Championships at Loughborough in March 2022. Then 4 further positions are picked by the selectors on performances from now up until the race, with the top 12 in the race receiving a letter with the chance of being selected to represent their County.

The highlight of the day came in the Under 17 women’s race with Emilia Platt running brilliantly to become Greater Manchester (GM) Champion in a close fought battle winning by 9 seconds. Emilia has now gained automatic selection to represent GM in March. Emilia had great back-up from teammates Aliesha Smith 7th and Imogen Gush 12th which was good enough for the GOLD team medal, well done! The team are pictured with their medals, left to right: Aliesha Smith, Imogen Gush, Jack Dobson (coach) and Emilia Platt.

Working through the age groups and starting with the under 13 boys, Alfie Manser gave himself a good chance of GM selection after finishing an excellent 6th place. Marshall Fleet 16th, Sebastian Stewart 28th and Max Ormston 29th made up the team which finished a creditable 5th place. Only one representative went in the under 13 girls with Sophia Gush battling hard to a strong 20th place finish. Again just one representative in the under 15 boys event with Ethan Sykes placing 16th overall. In the under 15 girls event the team finished 6th overall with good performances from Alice Cunningham 22nd, Kayla Corbett 27th and Harri Fleet 30th.

Hayley Simpson had a terrific run in the senior women’s race over the 7K distance coming home in 6th place giving her chance of GM selection. Joe Hudak gained automatic GM selection after a superb run to finish strong and take the Bronze medal over the 10k distance in the senior men’s race. Gavin Browne also performed well and in chance of selection after finishing 6th place. Other good performances came from James Hartshorne 63rd, Alan Kennedy 68th and Derek Hughes 78th with the team finishing 6th place overall.

More photo’s and brilliant videos of ECH athletes negotiating their way through the huge puddle are available on our Facebook page. Well done to all the athletes who took part and the support from coaches, parents etc. on the day.